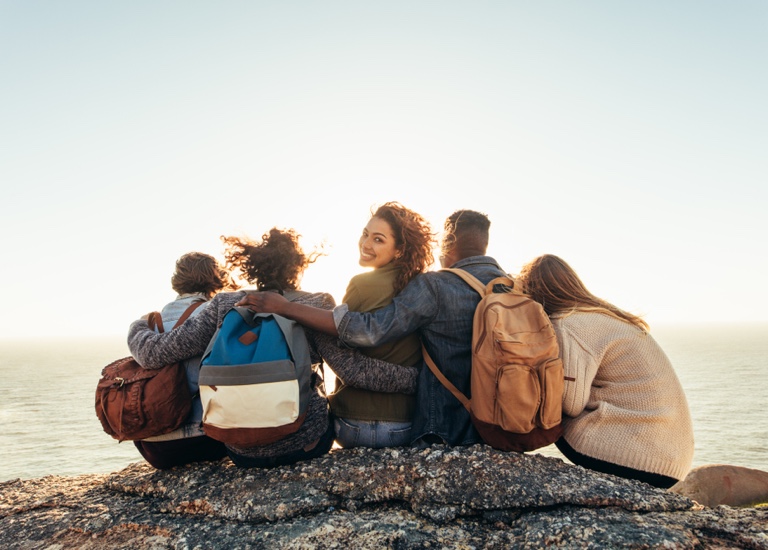 ‘All the groups in our church focus on families…’

If you’re someone who is looking to get married, you may resonate with these statements. It can be hard to fit into a world and church built around the spouse-and-three-kids norm. What’s interesting is that two of these statements are from married people who haven’t been able to have children. Singles and childless-not-by-choice couples have much in common. We can both feel the need for deeper connection.

For ten years my wife Merryn and I tried to start a family. Our journey included special diets, healing prayer, IVF rounds, and nearly three years pursuing adoption. None of it worked. Prompted by a friend, I wrote a book about our experience called Resurrection Year, then followed it up with The Making of Us, a book exploring who we can become when life doesn’t go as planned. Having since heard from readers from all walks of life, I now know we’re not alone. The hunger for deeper community is vast.

And a seventh-century saint may be able to help us.

The famed medieval monk Cuthbert is as integral to England’s north as its wind and its waves. I got to know him well while writing The Making of Us, which is based on a pilgrimage a friend and I did in Cuthbert’s steps. Not only was Cuthbert instrumental in seeing the gospel take root in this country, as a single and childless man he was able to live with the deep connection we crave. How did he do it?

From his base on Lindisfarne Island, Cuthbert traipsed the north for years, preaching up a storm. But he didn’t do it alone. He had a mentor—Boisil. Having been drawn by the holiness of his life, Cuthbert entered Boisil’s monastery and learned from him how to pray, heal and preach. A story tells of the special bond that formed between them.

‘I have only seven days left to enjoy my health,’ Boisil told Cuthbert at the end of his life. ‘Learn from me all you can while I’m able to teach you.’ When Cuthbert asked how best to use the time, Boisil suggested they read the Gospel of John together. Over the course of the week Boisil instilled in Cuthbert a love for that book, foretold some key events in his future, then died having shaped Cuthbert profoundly.

Do you have a mentor who is older and wiser than you, biblically grounded and spiritually mature, who can speak into your life? It might be a pastor, spiritual director, or an older member of your church. I can think of two people who have played such a role for me, one formally, the other informally. Look for holiness in a potential mentor, ask them out for coffee, then seek their advice on something you’re wrestling with. If they have wisdom to share, repeat the process. In time, you may find yourself a mentor.

Cuthbert also had what we could call soul friends—contemporaries with whom he could bare his deepest self. One such friend was Herbert, an island-dwelling hermit in Cumbria.

Living far apart, Cuthbert and Herbert met just once a year for mutual encouragement. When Cuthbert once revealed that his health was failing, Herbert fell at his feet in tears. ‘We have served God together on earth,’ he said. ‘Ask God now that we may depart together too.’ Cuthbert prayed and Herbert got his wish, the two friends later dying on the same day on their respective islands.

A few years ago I realised I had many acquaintances but few soul friends. To remedy this I started intentionally reaching out to three friends whose company, conversation and faith I enjoyed, and sought to spend more time with them in person and via skype. Over time we shared deeper and deeper things and took shared some adventures (including that pilgrimage). Slowly, soul friendships formed.

Soul friendships take time to develop and we can only expect to have one-to-three of them. But they are life-giving. Do you have a friendship that you could take deeper? If not, how could you start to build one or more?

Cuthbert lived in a monastery, eating, praying and working with a small band of brothers. If that freaks your introverted heart out, you’re not alone. When things got too busy, Cuthbert retreated to a tiny island for solitude and later moved to a larger island down the road! But he was always part of the community.

While many today are experimenting with shared housing and other forms of intentional community, for most of us a church small group will be our most accessible equivalent. As the quotes at the beginning show, the results can be mixed. It’s taken Merryn and me several years to find a small group that’s truly become community. All the other members are parents, yet we still fit in—proving you don’t need to be homogenous. Shared faith and lives bind us together, not marital or parental status.

In my experience, the key to small groups flourishing is having people-oriented leaders who ensure everyone’s story gets told. If you can’t find such a group, could you start one? When Merryn and I couldn’t, it was skype chats with soul friends that got us through.

Single, married, with children or without, we all need deeper connection. Cuthbert shows us three levels of relationship to build into our lives. Working on just one will make a difference. The rest we can grow in time.

Sheridan Voysey is a writer, speaker and broadcaster. A regular contributor to Pause for Thought on BBC Radio 2’s Zoe Ball Breakfast Show, he also speaks at events around the world. His latest book is The Making of Us: Who We Can Become When life Doesn’t Go as Planned.