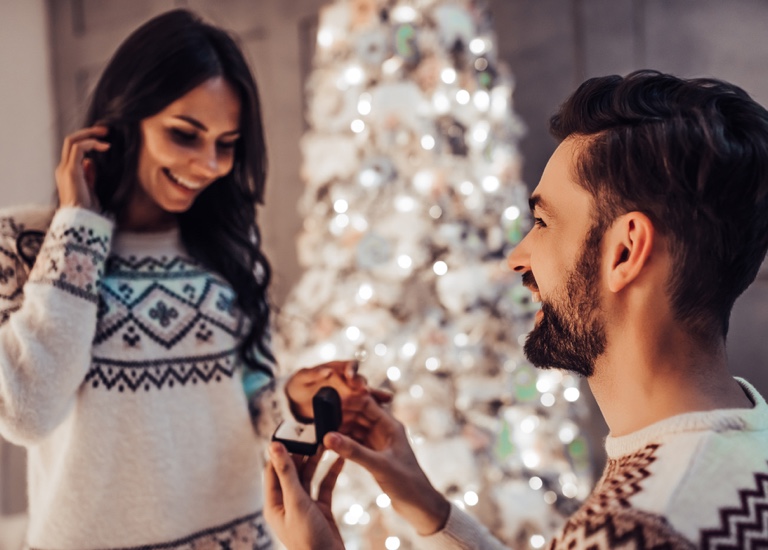 A modest proposal? The private/public dilemma…

It’s beginning to look a lot like Christmas… and if you’re dating, you might be hoping for a little extra under the tree – because Christmas Eve is the most popular day of the year for getting engaged. It’s easy to see why: people are off work, spending time together, giving gifts, and there’s already more than a hint of celebration in the air – plus it’s a great time to announce the happy news to friends and family…

These days, proposals are almost as big a deal as weddings. So passé are the days of a private, romantic moment, maybe over dinner, or spontaneously popping the question (my friend’s husband asked her to marry him in hospital, as he came round from a general anaesthetic!). These days, it seems proposals have to be elaborate and flashy (at the Taj Mahal? With a flash mob? While skydiving?!) or at least with an audience – at a big sporting event, on TV, or in a carefully choreographed set-up with a cast of family and friends, ideally filmed to be uploaded onto social media later.

Perhaps men (and it’s still usually men) feel the pressure to make a proposal memorable – something their fiancée can brag about to her mates and share online – with the possibility of going viral. But many people feel a public proposal is too exposed and potentially manipulative – after all, it would be pretty hard to say, ‘No’ or ‘Can I think about it?’ to your beloved in front of an awaiting crowd (although I’ve seen a few public knock-backs – mortifying!). Unless you’ve already discussed marriage and know it’s a sure thing, the question is less, ‘Will you marry me?’ and more, ‘Will you turn me down, humiliate me and break my heart in front of all these people?’

My hairdresser’s now-husband pre-recorded an action sequence starring himself, which was played to his unsuspecting girlfriend during a girls’ night in at a friend’s house (her pals were in on the plan). At a critical moment in the film, he burst into the house in person and dropped to one knee in front of her chums. He then whisked her off to a surprise party, where all their relatives were waiting to congratulate them, before heading to the airport for a week in Paris, with time off work secretly arranged with her boss. ‘Crikey,’ I said, at the end of this breathless story. ‘He was pretty certain you’d say yes!’ ‘I know! I told him he was a bit too sure of himself!’ she laughed. But she absolutely loved it, and they’re expecting a baby any day now.

Personally, though, I’d hate a public proposal – it would feel exhibitionist, manipulative and, well, a little bit tacky. Even if I wasn’t ready to get hitched, I couldn’t embarrass someone by rejecting them publicly, so I’d have to say ‘yes’, smile a lot for the rest of the evening, and then withdraw my acceptance later. But then, I’m a private person, and if a man didn’t know me well enough to understand that I’d hate to have an audience for such an intensely personal moment, then we shouldn’t be making wedding plans anyway.

You see, it’s all about knowing your beloved. So if you’re planning a proposal this Christmas, think carefully about who your partner is. Would they enjoy an extravagant experience surrounded by friends, family or the entire audience of a sports stadium (and are you absolutely sure they’ll say ‘yes’)? Or are they shy, dislike being the centre of attention, and would prefer a quiet declaration between just the two of you? If you know your partner well, you can’t go far wrong.

To illustrate people’s vastly differing feelings on this topic, let me end by handing over to some of my readers and Christian Connection members…

‘I’d prefer a private proposal. I’d be mortified if something so personal was done as public entertainment.’

‘I’m outgoing and a romantic gesture at a party where friends could share in my excitement is something I’d remember forever.’

‘I wouldn’t care, as long as he’s God’s choice for me. If I was going to say “yes”, I’d say it regardless of the proposal.’

‘No, no, no! I’d hate a public proposal. It should be a special, private moment, not a sideshow. If my boyfriend put me through that, I think it might end the relationship.’

‘I proposed in front of my now wife’s family. She seemed happy enough – she said yes, at least!’

‘Something quiet and intimate is better. I hate being the centre of attention – I’d be so embarrassed and uncomfortable, I’d probably run away from the whole scene.’

‘My husband didn’t propose to me – marriage was something we naturally discussed as the relationship progressed, and we knew it was what we both wanted. A “proposal” after that would have seemed silly.’

‘Public proposals are sweet because a lot of thought and effort goes into them. I’d really appreciate that from a future fiancé.’

‘I love watching public proposals on YouTube, but I hope my own is quiet, private and romantic. I don’t even want friends or family around, much less strangers.’

So, what would your preferred proposal be?