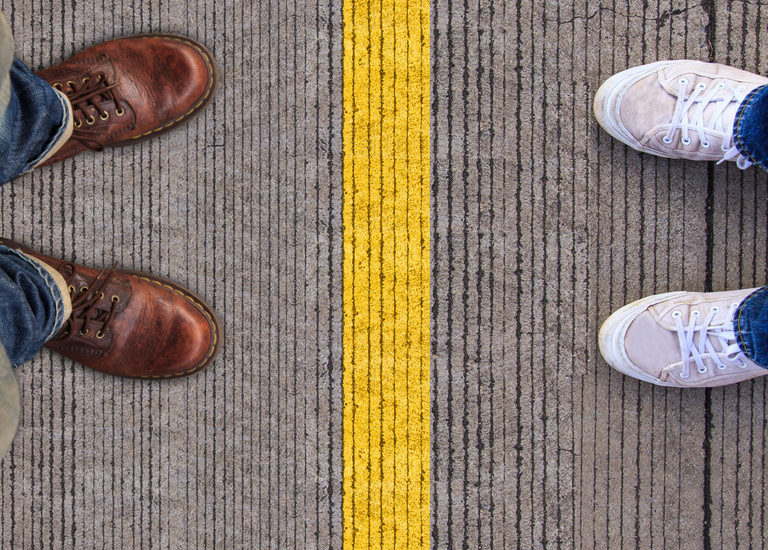 ‘Don’t worry, HopefulGirl, you’ll meet someone soon – the divorcés are coming back onto the market every day!’ declared my friend, cheerfully.
‘Great,’ I sighed. ‘Divorce, broken families and shattered dreams – and me picking through the carnage. There’s something to look forward to.’
Divorce is a touchy subject for Christians. Some believe that, once married, a person is never free to marry again unless their spouse dies – and no exceptions. Others believe God doesn’t condemn us to be single forever if we, or our former spouse, made mistakes or behaved badly. It’s a theological tangle I’m not qualified to unpick – we each have to exercise our own judgement.

Theology aside, I admit that when I began my dating journey, I was somewhat prejudiced against divorcés. I knew it was unfair: many people’s marriages end against their will, and through no fault of their own. But I couldn’t shake the feeling that they’d already proved they had no staying power. And what about all that emotional baggage that comes with a divorce – once bitten, twice shy?

This may well be true for some divorced folk. But over time, I had to repent of my prejudices and revise my assumptions. Most of the divorcés I met actually had less baggage and fewer hang-ups than some of the ‘forever singles’! Despite having been through painful break-ups, they were convinced of the benefits of marriage, and weren’t afraid to have another crack at it. Far from being commitment-shy, they were keen to find a good woman and get on with the business of building a healthy relationship.

These chaps were often more confident, and knew exactly what they were looking for in a partner. They’d learned from their mistakes and seemed well equipped to conduct a grown-up relationship. Plus another woman had already put in the work on their domestic training! 🙂

Of course, if I were considering a relationship with a divorcé, I’d need to know exactly why his marriage ended. Infidelity would be a serious red flag, as would be an inability to examine honestly the part he may have played in the ending of the marriage.

There’s another issue: it takes time to recover from a break-up. Trying to immediately fill the gap left by an ex-spouse is rarely a recipe for a healthy relationship. I’d need to be sure my potential partner had taken time to heal, and was truly ready to move on. How long that takes will vary, depending on the person and their circumstances. However, based on my own journey of recovery after the painful ending of a long engagement, I’d be wary of anything less than a couple of years.

I once went on a date with a gentleman who spent most of the evening telling me about his wife’s betrayal a year earlier. It was a shocker of a story, and the poor guy clearly hadn’t processed the trauma, let alone found any peace in it. He was hurt, broken and bitter. In his position, I would be, too – but let’s not forget, this was meant to be a date. (You can read the full grisly story in my book, Would Like To Meet).

So if being divorced isn’t a deal-breaker for you, and you find yourself interested in someone who’s single for the second time, here are my top seven issues to consider…

1. Is the marriage definitely over, with no chance of reconciliation?

2. How long is it since their separation? Are they rushing to fill the gap left by their spouse, or do they seem genuinely ready to move on?

3. Have they worked through the trauma of their divorce? Do they have ‘closure’ or are they still dealing with shock and grief?

4. Are they able to discuss their former spouse without too much anger and bitterness? Have they been able to forgive (or are they at least working on it)?

5. What have they learned from the experience, and what would they do differently in a future relationship? Are they able to ‘own’ their part in the break-up?

6. If they cheated, do they accept full responsibility for their behaviour and show genuine repentence? How do they plan to protect any future marriage from infidelity?

7. If they have children, can you embrace them as part of the ‘package’? Are you prepared for their children to be suspicious and resentful of you, at least to start with?

What’s your take on dating after divorce? If you’re divorced yourself, what advice would you give to others?