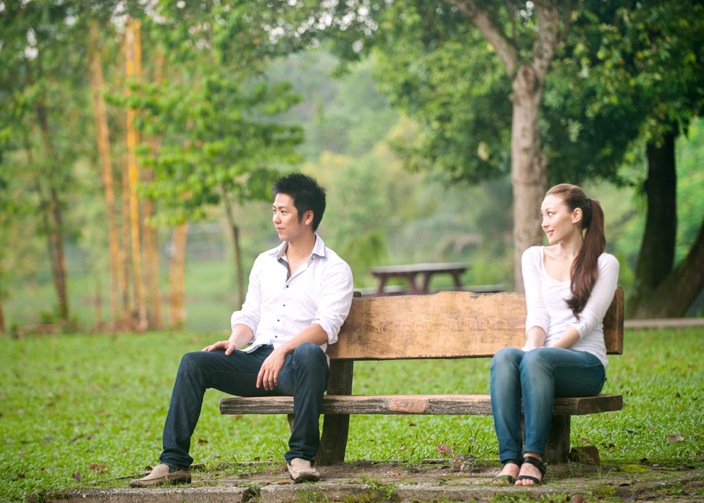 Seven fears that stop me asking girls out

Some time ago I wrote a post about “why guys don’t ask girls out”. In writing that I slipped into the mistake common to a lot of what’s written about relationships. I wrote about generalisations, concepts; in focusing on the abstract I took the easy way out.

It’s the easy way out and it is the mentality of glossy magazines and trendy bloggers – we aggregate examples, form a trend and we look for a solution that can fit in a tweet.

I sometimes think that having a list of things to do to solve a problem is the same as having it sorted.

Last year Emily Maynard tweeted that if she were to write a book it would be called “I Have No Idea How To Fix Your Life And It’s Weird That You’re Looking In Books For That.”

The irony is if a book like that was written, I’m sure it would sell pretty well.

Writing on relationships is hazardous because I cannot tell you how to live your life. I cannot give foolproof advice on what you should do in the situation in front of you, because I do not know every aspect of that situation.

When it comes to guys asking girls out, guys get a bad wrap. Christian guys are wimps, they don’t do the job, they need to man up, take a risk and ask a girl out. That’s the conventional picture painted. I want to step back from the generalisations and tell my story. My seven fears, the seven things that hold me back. Not always, and not indefinitely, but they affect me.

1. I don’t ask girls out because I fear change.

I was going to say commitment, but I don’t think that’s quite right, it’s also a lazy stereotype. I am committed to all sorts of things, it’s the idea of changing those commitments I am afraid of. When fear of commitment is talked about sometimes that’s exactly what it is, a fear of committing to a person indefinitely. That might be why people are hesitant about marriage, but that this is an issue around dating suggests our conception of dating might be where we go wrong. To date is not to commit for life.

I worry that my life will change, and that might make me uncomfortable, I worry that instead of being able to do what I choose, I will be living life with someone else, even if it is only the very first baby steps of that adventure. I fear that it will be something I do not like.

2. I don’t ask girls out because I fear being seen as frivolous.

I don’t want a girl I ask out to think that she’s just the next on a list. I fear being seen as frivolous with my affections. If I ask out a girl this week and then another the next, which one am I interested in? This brings up the major difference I’ve noticed between dating in and outside the Christian world, and one of those generalisations I warned against: Christians date people they are interested in, outside the church people date to find out if they are interested.

3. I am afraid of rejection

It’s quite simple, I don’t like the idea that someone might say no. I don’t like the idea that someone, in whom I have invested emotional energy in deciding that I like, might turn me down. I put myself on the line and they say no. So I don’t. The answer isn’t that girls say yes to every date to make guys like me feel better – aka the sympathy date. Rejection is to be expected, if you don’t like a guy, don’t go on a date with him. Doesn’t mean I have to like it.

4. I’m afraid of not being a very good date

I don’t really mean this about someone not liking me, I mean that I am afraid that I won’t do the right things, in the right way, with sensitivity and the appropriate amount of forwardness. I am afraid of getting it wrong. I am afraid of being unfun.

If that’s how I approached a date I wouldn’t be myself. I would be someone trying to be and do the things that someone who is good at those sort of things is. Frankly, I think I’d be a bit of a fraud. But this means I’m afraid of doing it at all.

5. I don’t ask girls out because I’m afraid it could get awkward

It’s the perennial issue of dating in a goldfish bowl (or church). The person you ask out will be sat a few rows in front of you on Sunday. In the pub. At this event or that. Your friends are their friends, you’ll be eternally ostracised from all social settings. To which I say, to myself, get over yourself, relationships involve honesty and conflict, and navigating them can be tough. But ignoring them and hoping everything will be rosy is worse.

6. I’m afraid of losing their friendship

There’s a girl I like. Hypothetically speaking of course. Anyway, this girl, imagine she and I are friends. But actually I fancy her – a juvenile and inadequate phrase but it does the job – and I worry that if I say something I’ll lose the friendship we have. So I don’t do anything, I maintain the illusion of a friendship grounded on mutual platonic feelings so as not to upset the apple cart. It avoids me getting rejected and it allows the friendship to continue as it was.

But it’s a complete farce. What kind of friendship am I really building if I’m deceiving the other person about what I want out of it?

7. I fear I might miss out on someone better

It’s the grass is always greener idea. The thought that someone better will come along. You look at the girls you know, those you might consider asking out and you think, ‘she’s great, but she’s not perfect, maybe someone with hair closer to my perfect shade of brown will come along soon’.

The idea that the grass is always greener somewhere else is an illusion, in the words of Sean Paul and Justin Bieber, the grass is greener where you water it.

There’s my seven fears. What have I missed? What stops you from doing something, saying something, to the person who’s caught your attention and stopping you from sleeping?