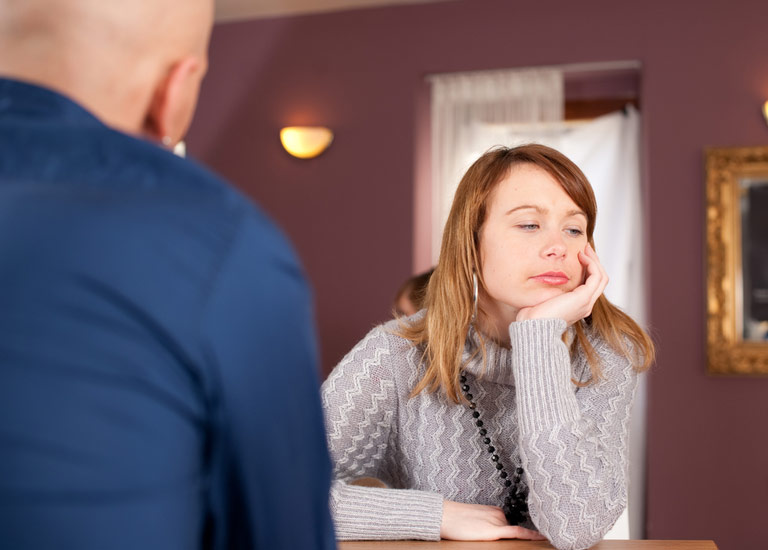 I hate to admit it, but back in my single days, I unnecessarily bungled a number of first dates. And the saddest part was, I didn’t even know I was doing anything wrong.

There were clues, no doubt — like when my date would yawn, clear her throat and say she didn’t feel well — but I just assumed the woman was rude, and I told myself I wouldn’t want to go out with her again anyway. In retrospect, I realize that most of these awkward first dates were the product of weird stuff I was doing. A lot of it was easily avoidable, and in fact, there were several people who tried to give me helpful pointers, but I wasn’t listening.

However, just in case you are interested in being like me and ruining your next few first dates, I’ve got great news: It is remarkably easy to pull off. Just do one or more of the following, and you’ll have your date wanting to run home in no time.

OK, OK, I don’t mean that you should really propose. Just hint that it could be possible one day — or at least make a point to talk about your earnest desire to be married (the simplest way is to say, “I feel called to be married” at some point in the conversation).

When you do that, it has an almost-magical ability to instantly make you look desperate for stability, sex and companionship. Seriously, nothing says, “I’m really needy, and I need you to complete me” like bringing up your obsession with marriage on the first date. Go for it!

The possibilities for pulling this one off are as limitless as your issues, offenses and negative memories. So, for example, you can talk about your struggles with weight gain. Or you might consider bringing up a past relationship that ended badly. And if all else fails, talk about a time when you felt rejected by others in the past (if you currently feel rejected for some reason, that would be even better!).

Wandering into the morass of these uncomfortable stories has the double benefit of making you appear both unforgiving and self-absorbed. It’s a perfect combo for making someone want to push you away (again).

If you want to get this one right, sit down, think about your criteria for a spouse, and then formulate some questions that will help you determine whether you’ve found the pot at the end of the rainbow (aka “the one”). Some of the questions will sound like they’re straight out of a job interview (“Where do you see yourself in five years?”), while others will be more subtle, yet still obvious (“Do you like kids?”).

But don’t just ask questions; make sure to communicate that what you’re really doing is judging the person. Here’s how you do that: As you listen, weigh your date’s positives and negatives, think about what he/she can offer you, and allow yourself to feel the disappointment when you discover another person who doesn’t have every quality you’re hoping for in a spouse. Your date will immediately pick up on it, and they’ll wish they were with someone who just wanted to get to know them for who they are (that is, they will wish they weren’t with you — mission accomplished!).

Although these are my top three ways to ruin a first date, there are certainly more (like being too touchy-feely, playing with your phone, and arguing with your date). But basically, all of the advice for ruining your first date boils down to this: Just be yourself — let it all hang out, and if they aren’t interested in who you really are, then you didn’t need them in the first place.

On the other hand, if you actually want to get married someday, when you’re on a first date, talk about desires other than marriage — it will show you’ve actually got a life. Only share the kinds of things you’d share with a friendly stranger — because there’s a good chance your date will be a stranger in a couple of years. And use a first date as an opportunity to get to know the person as a human being (rather than a prospective spouse) — because even if you two end up together, a human being is what you’re getting anyway.

As a result, the person will not only feel more relaxed and more respected on your first date, they’ll be a lot more likely to go on a second one.