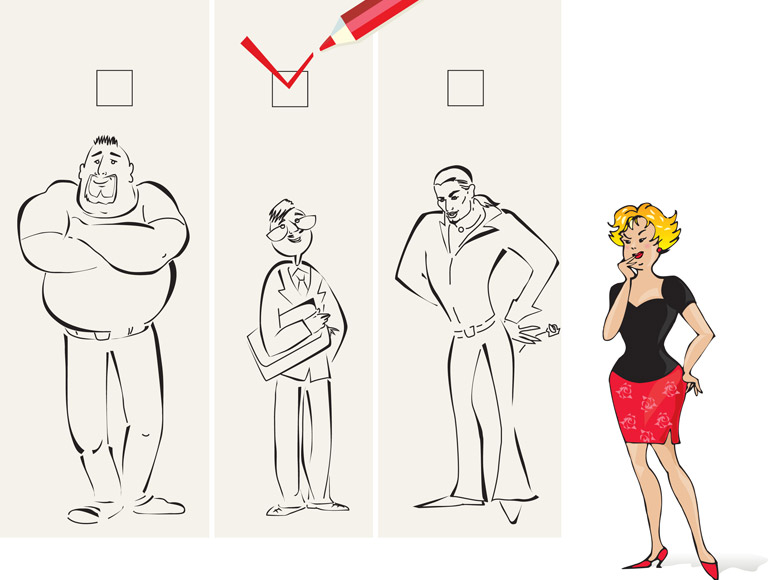 I was wondering… about playing against type

I had a type. It changed occasionally (OK, regularly), sometimes depending on the last film I had seen or whoever I had just passed in the street. But there was always someone – a hypothetical someone – who ticked all the boxes. An invisible standard, lurking in my subconscious, by which all potential suitors would be measured. I just had to wait for him to glide majestically into view.

Maybe you’re there already; maybe the magical milestone is still to come, but whichever side of the big 3-0 you happen to reside, there’s something you might have noticed. Although I didn’t look dramatically different – well, apart from a sudden love for support tights and elasticated waists, obviously – once word was out perceptions changed. Have you seen ‘Bride Wars’? I won’t judge you if you say yes. Thanks to my hairy, tattooed brother (yes really) I have, and a concept from it stuck in my mind. In summary: 30 is the last age a man will go out with a woman of his own age; after that, he always goes younger. A woman over 30, therefore, should expect the attentions of older men, not men the same age, who would only be interested in younger women.

And yet it seemed some people enthusiastically bought into this notion. I was suddenly suggested as the perfect companion for significantly older men. In one case, I was solemnly assured, because the gentleman in question had “never grown up” (hopefully not one of those chaps fond of wearing nappies). I was also told if I could hang on for a few more years I could catch the second-time-rounders back on the ‘market’, or even bide my time, staring intently from a distance without introduction, for some poor chaps to recover from tragically being widowed. None of it seemed terribly romantic. Slightly alarming, yes. Sinister? Just a little. A pre-defined role as a companion to the heartbroken (or Peter Pan) and I – and maybe they -didn’t get much say in what happened next. So much for having a type. I was already being typecast.

But then I looked around at couples I knew and saw a lot more variety. Differences in age, culture, race, education, height, weight and background. Men older than women but also (gasp!) women older than men. One couple born on the same day in the same year now excited about becoming grandparents. Couples who met at youth group and university and church but also couples who met on blind dates, by chance in nightclubs, even on trains. Unexpected matches in which both flourished. Where types didn’t apply, because something deeper had kicked in.

So when long-time single friends* announced they had found love with older, divorced single parents despite having devoted years to hooking super-hot, younger, uncomplicated matches it made me wonder. On paper (or online) it can seem so straightforward. This is what I want. Don’t even talk to me if you don’t fit. The delightfully misused ‘God will give me the desires of my heart’ wheeled out to justify preferences, but unless we’re perfect (except me, obviously) we need to broaden our horizons. Let character, sense of humour, inspiring conversation, kindness, even differences and challenges, draw us to others. Prepare to be surprised. See what we might be missing. Say goodbye to types and hello to possibilities.

*Male and female. Did you guess? 😉